Orchid: A New Approach to VPNs

Orchid is a decentralized, market-based system for anonymous communication and virtual private networking, including a bandwidth market where node providers stake tokens to advertise their services using the Ethereum blockchain and receive payment in OXT (Orchid’s native cryptocurrency).

Using a distributed system allows you, as a user, to distribute trust across multiple distinct VPN providers, thereby breaking apart the flow of your information so no single entity can see the entire picture.

In the Orchid marketplace, incentives are used to create economic security and reliability between clients and servers in a permissionless way. This peer-to-peer marketplace is dynamic; clients can select single- or multi-hop onion routed circuits by selecting nodes randomly weighted on stake and filtered on secondary desiderata (price, location, etc.). A single hop route has the benefits of a normal VPN connection, creating a tunnel to route your traffic over a public network or your ISP, while a multi-hop connection provides additional privacy benefits by securing your network data from any one provider.

Traditional VPNs today are limited; the centralized nature of their offering cannot compete with the distributed properties of combining multiple different providers to offer multi-hop level security. And even if a single company offers multiple hop VPN routes, there is still a single centralized entity you are placing your trust into. Using a distributed system allows you, as a user, to distribute trust across multiple distinct VPN providers, thereby breaking apart the flow of your information so no single entity can see the entire picture. Such a system is not possible when purchasing a VPN service from a single provider. 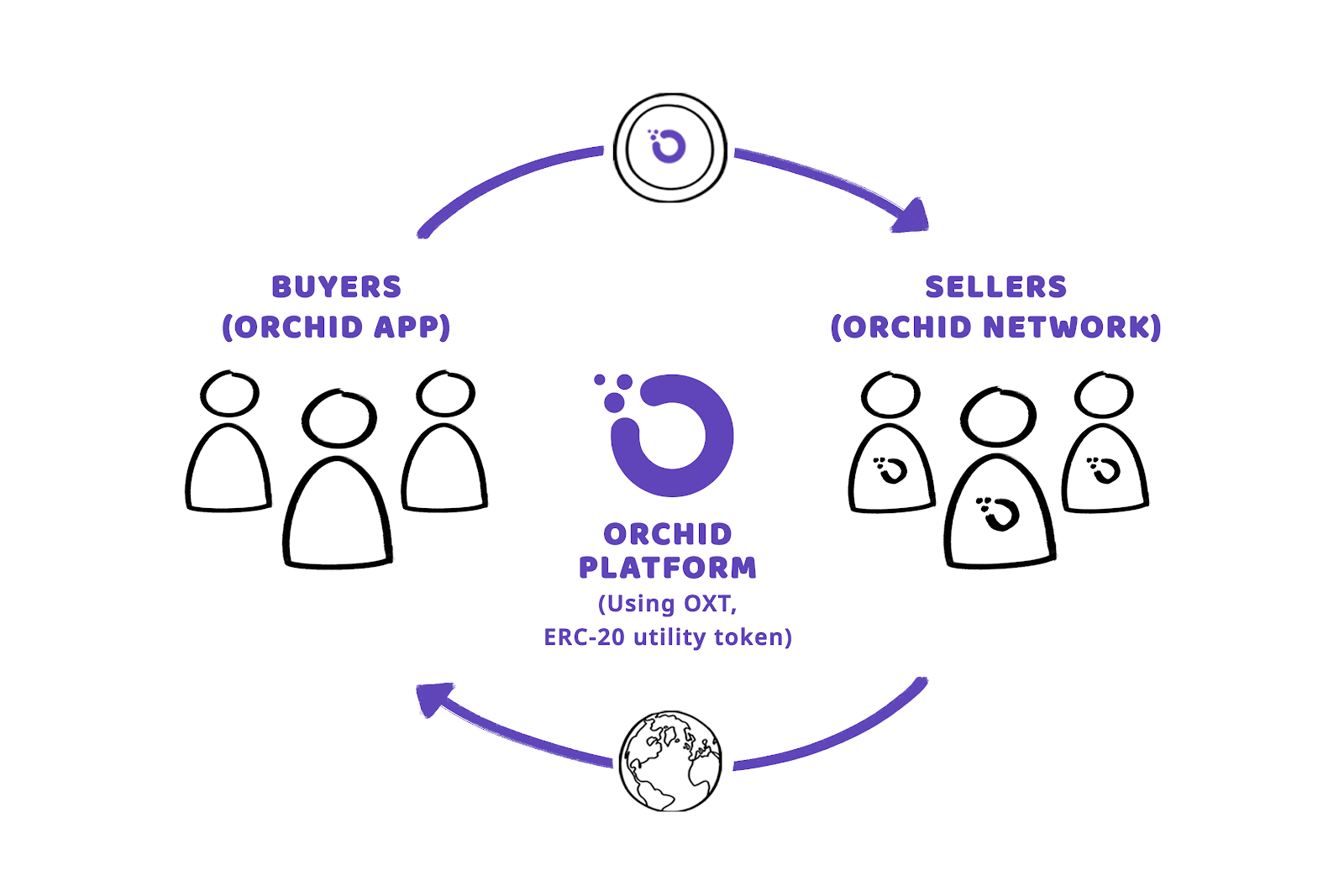 Orchid’s technology is highly modular. Each component is intended to be somewhat separable, and to interact well with a particular role in the larger ecosystem. Abstractly, the system involves:

In pursuit of security, we have tended to remove features and design elements that we did not think would continue to function basically “as is” for many years. 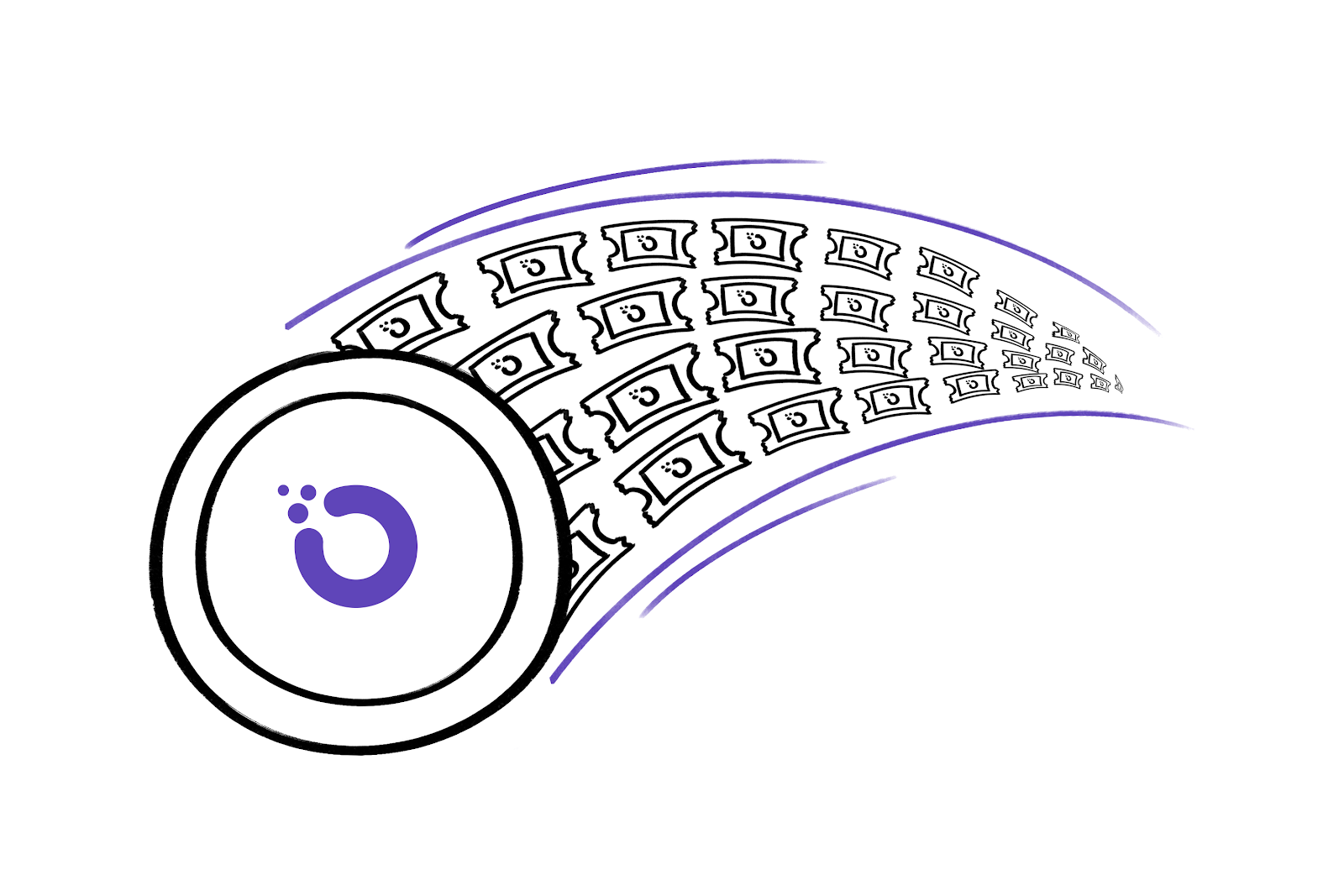 OXT is expected to be a “pre-mined” cryptocurrency based on the ERC-20 standard that will be used to decentralize trust between buyers and sellers in the Orchid marketplace. It also functions as a tool to promote security and healthy market dynamics, as providers can adjust their OXT stake to remain competitive. At launch we intend there to be a limited supply of one billion (1,000,000,000). We do not intend ever to create any additional OXT.

The Orchid software is designed to use a custom VPN protocol, similar in scope to OpenVPN or WireGuard. The Orchid protocol is designed for high-performance networking and runs on top of WebRTC, a common web standard, widely used to transmit video and audio from inside browsers. Our protocol is intended to allow users to request access to remote network resources and pay for these resources using OXT via a nanopayments system.

Service providers on Orchid are anticipated to run a server similar to a typical VPN daemon for protocols such as OpenVPN, but which speaks the Orchid protocol. Orchid servers maintain registration information in a stake registry and provider directory. The stake registry is optimized to enable the Orchid client to automatically discover random servers on behalf of users in a decentralized environment, while the provider directory allows server nodes to register metadata such as geolocation or additional services offered. Collectively, the Orchid Servers make up the Network.

Orchid uses a set of data structures stored on the Ethereum blockchain that allows clients to efficiently select bandwidth-sellers’ nodes.

Clients are expected to select nodes for proxy chains using a two-step process of random relative stake-weighted linear selection, followed by secondary constraint filtering. The first stage linear selection is performed by the scan function on the node directory tree. The App generates a random point locally and passes it in as the single argument to scan, which then descends down the node directory tree. The search terminates in the single unique leaf, or internode, whose stake segment intersects the chosen random point.

After selecting one or more nodes based on linear relative stake weighting, the app can then filter by additional criteria such as exit geolocation, latency (ping), price, custom node metadata tags, and arbitrary whitelists. 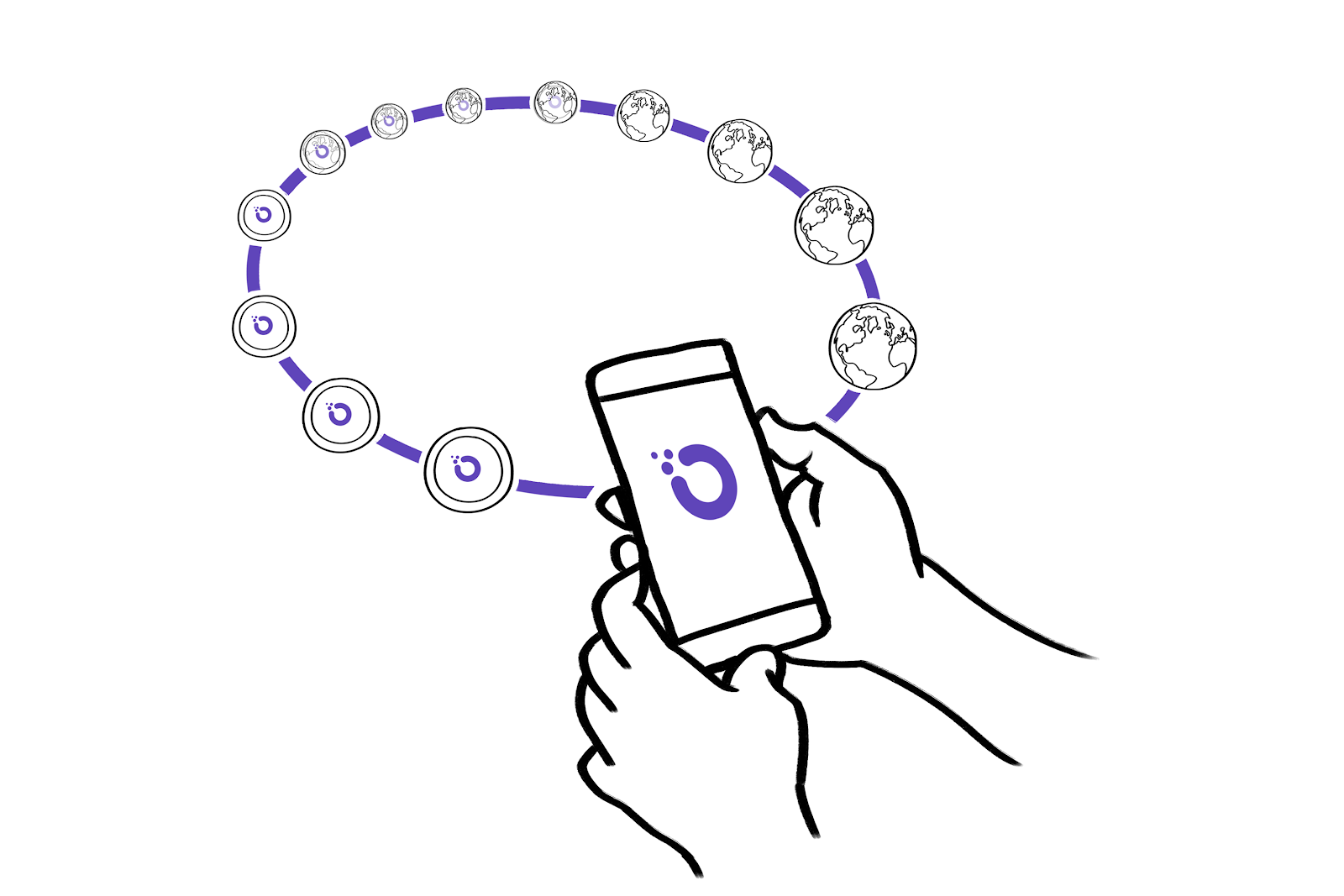 The Orchid App is a client similar to a typical VPN client for protocols such as OpenVPN, but which speaks the Orchid protocol. The Orchid network client is intended to go past the basic functionality offered by most VPN clients, with features such as the ability to analyze network traffic and to pick multiple providers in a multi-hop configuration. The Orchid client is accessible via iOS, Android, macOS, Linux, and (soon) Windows.

Orchid’s structure uses a new probabilistic nanopayment system designed to allow the system to scale to potentially millions of transactions per second, enabling decentralized payments on a per-packet basis. This nanopayment system is the foundation of the Orchid peer-to-peer bandwidth marketplace where clients pay Node operators OXT lottery tickets for proxy bandwidth. The system is designed to lower the transaction costs for small payments by amortizing transaction fees across many transactions and even across multiple parties.

The main participant roles in the Orchid Market are:

Bandwidth sellers register their nodes on the Ethereum blockchain and user clients select suitable nodes for routes through calls to Ethereum smart contracts. Orchid’s structure uses stake-weighting: sellers lock up OXT cryptocurrency to form stake deposits associated with their nodes in order to receive traffic in proportion to their relative stake.

The various components described above collectively form Orchid. When we put the pieces together, we are in the process of creating a new VPN product that harnesses the nature of decentralization to distribute trust across multiple providers and ultimately give the user far more agency and control than is available on the current market. By combining a decentralized design with a market-based incentive structure, we believe that users can protect their privacy and control their data while creating demand to support a healthy marketplace.

We anticipate in the future that the open source community developing on our protocol will be working on solutions for traffic analysis resistance, payment anonymity, low-variance nanopayments, improved double-spend detection and prevention, traffic obfuscation, improved censorship resistance, whitelist surety bonds, and more.

As both governments and corporations attempt to control our online interactions, the VPN market is skyrocketing. But in order to achieve what users desire in a VPN service, we need a new model. At Orchid, we think that a peer-to-peer marketplace and decentralized architecture on the Ethereum blockchain can help pave the way for a new era of online interaction, where individuals, not organizations, control the future.

Stay Up to date with Orchid

If you want to keep current on the latest Orchid news and be among the first to test out the network, sign up for our newsletter to receive launch updates.

How to make sure your VPN is working properly

Decrypt Reporter on Making Omelettes with Bert the Robot