We are excited to announce that Orchid is now in the Apple App store, and includes a special feature: iOS users can buy an Orchid account right in the app. This new feature makes it easy to use the crypto powered VPN with only fiat currency such as U.S. Dollars (USD) -- there's no need to acquire or transfer cryptocurrency at all. People can now enjoy all the benefits of Orchid's peer-to-peer bandwidth market with the same level of convenience as any other app.

Before in-app purchases, users had to go through the somewhat complex process of setting up and funding an Orchid account with crypto to get started. The steps required -- including acquiring OXT (the Orchid DApp coin) and ETH, installing a web3 browser, running smart contracts, and transferring a key -- will be familiar to anyone who has spent time in the crypto space.

Now there's an easier way to get started. In-app purchases give people fully functional, shareable Orchid accounts powered by crypto, but with a simplified onboarding process that's as quick as any other iOS app. And all users enjoy the same level of privacy Orchid has always provided.

Orchid takes care of the details so users don't have to

In-app purchases make it much easier to get started using Orchid, but the underlying architecture of the network is unchanged. Orchid's decentralized marketplace is still powered by OXT, the Orchid Digital Currency, which is used to pay for VPN bandwidth through a unique system of probabilistic nanopayments, and users still get the full benefit of the privacy and ample bandwidth Orchid provides. What's new is that rather than creating an account with their own cryptocurrency, users are able to buy one that's been pre-created for them (like a prepaid gift card). Orchid's new fiat payment system allows users to purchase an Orchid account with only fiat currency such as USD. To pay for bandwidth from a randomly selected VPN provider, users simply go to their account on the Orchid app and select "Add Hop." They then select "Buy Orchid Account," choose the dollar amount they would like to spend, and confirm their purchase through Apple. No wallets or crypto exchanges necessary.

To make this possible, Orchid automatically pre-funds a pool of accounts that can be assigned to users when purchased. There are three tiers of accounts, priced for different levels of Internet activity: $6.99, $29.99, and $79.99 for the heaviest users. Everything about the process is automated: a dedicated server manages an OXT/ETH wallet, creates accounts, and pools these accounts together. When a user purchases one, this same server assigns it to them at random. For each pricing tier, the server maintains a discreet pool of pre-funded Orchid accounts. 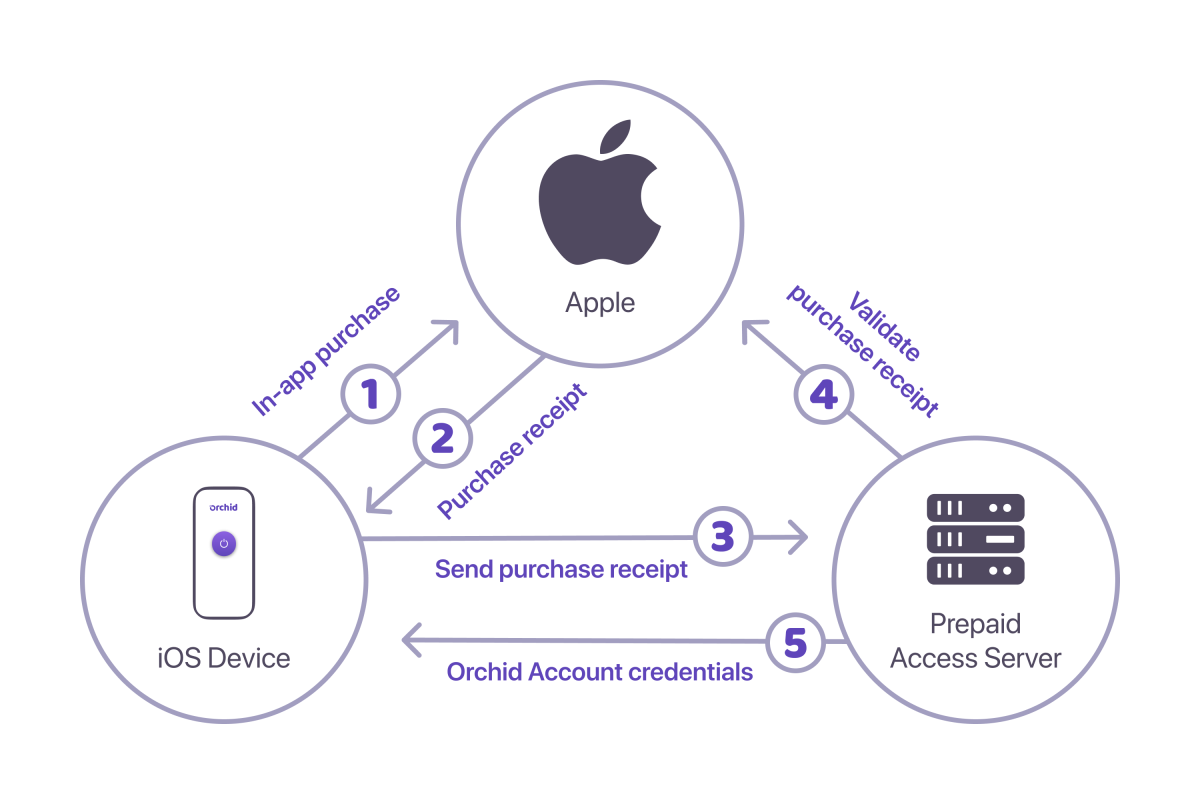 Once they have an account, people can use the Orchid app just as if they created the account with their own OXT. When someone buys an account with an in-app purchase, it's their account -- they have a private key and can share with anyone they like. The only difference is that users cannot take funds out of these accounts. They can only be used to buy bandwidth on Orchid, similar to a gift card. When one of these pre-filled accounts runs low on OXT, the user receives a notification, and can buy a new one.

In-app purchases will soon be available on other operating systems

In-app purchases currently support the iOS app, and soon will support Android as well. The team also has plans to expand pre-filled accounts to be compatible with credit card processors, allowing people to buy an account directly on the Orchid website. These accounts could then be linked through the app.

Like the rest of Orchid, the "prepaid access credit" system is fully open-source. Eventually, we expect other developers to build on top of it to contribute to the Orchid open source ecosystem.. Currently, when a user buys a pre-filled account, the Orchid client provides the pooled accounts server with an Apple receipt, which the server verifies as valid before assigning the account. (Orchid does not log these transactions.) Because it is open-source, Orchid's fiat architecture can be run by others to build new applications.

The release of in-app purchases is a major step toward Orchid's goal of making Internet privacy accessible to as many people as possible. This milestone lets people start exploring the Internet freely as soon as they've downloaded the app -- and all from their smartphones. Soon, in-app purchases will support Android as well as individual credit cards, further broadening this accessibility. And the more people that are able to go online in safety and privacy with tools like Orchid, the closer we will be to restoring an open and accessible Internet for all.

Starting today, it only costs $1 to get started with Orchid

Get started with Orchid on Android for just $1

OXT is listed on KuCoin